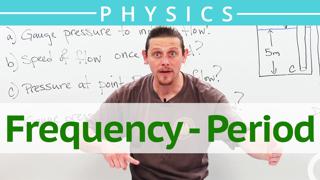 Waves are disturbances that travel through a fluid medium. Several common wave characteristics include frequency, period, wavelength, and amplitude. There are two main type of waves, transverse waves and longitudinal waves.

Let's talk about wave characteristics. Now I want to start off by just talking about, what is a wave? I mean we all kind of have this qualitative idea of what it is and what it means but how can I define one physically?

Well, physically a wave is a disturbance in a medium. What's a medium? A medium is any material usually a fluid, a liquid or a gas but it could also be a solid that doesn't like to be messed with. So if I move its atoms out of the way, they're going to try to come back. So that's a medium. And so I'll disturb a medium and then that disturbance is going to propagate through the medium. Propagate is a word we use to mean move but essentially, only when we're talking about waves or species sometimes but you could talk to the biologists about that.

Alright. So the important thing to recognize about a wave is that the initial disturbance is separate from the wave itself. The wave itself is a response that the medium has to being disturbed. Alright? So let's just go ahead and see this physically.

So I'm going to drop this dime into this little bowl of water. And let's watch what happens. So, as the dime fell in, it disturbed the surface of the water. Now, then the dime just went to the bottom. It's done. It doesn't have anything more to do with the wave. But the wave continued to propagate. It continued to disturb the medium after the dime was gone. And so that's what I mean by the wave itself is separate from the initial disturbance. Alright?

Another way that we could think of a wave is just that standard thing in crowds, right? Some dude stands up and then sits back down and then the other people carry that disturbance through the crowd with them, alright? So if the other people weren't going to stand up, it's not good enough that the first guy stood up. Everybody has to participate. So like we talked about before, a medium is something that doesn't like being disturbed. So that means when I disturb it, it's going to try and come back. So that property is called the restorative property of the medium.

Now in addition to that we have something called an inertial property. the inertial property is like the mass of the medium and that's what kind of resists this acceleration back to its equilibrium. And it's the interplay between these two things that gives us the wave. Alright.

Now, let's just talk about some basic types of waves. The first basic type of wave that I want to talk about here is called the pulse. A pulse is like a drum beat. You take your stick and you hit the drum once and you're done. So a pulse is a single disturbance that only assaults the medium once, alright? We're going to characterize a pulse by its amplitude. So if I've got the medium like this, you could think of like a violin string if you want to or a chain. so here's the medium undisturbed and then [IB] disturb it, the amplitude is going to characterize how severe that disturbance is. It's the maximum displacement of the medium away from its equilibrium position. So that amplitude is really going to be the only characterization of the pulse type of wave, alright? Other than its shape. And we can talk about that later. Alright.

Alright. So those are some basic properties of waves.