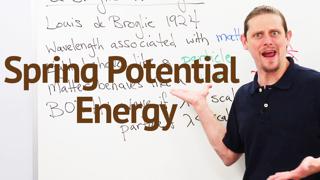 Hooke's Law is used to determined the restorative force or the amount of elasticity. Larger distortion would result in a larger force. Hooke's Law is expressed in the equation F = - k(x), in which k is the spring constant and x is the displacement.

Well, springs have a restorative force. So that means that if I pull on them, they try to pull back. They want to be a certain length and it's called their relax length. So if you pull on them they're going to pull back and that's because they're springy, right? So a larger distortion, the more that stretch it the more force that we need to do that.

So f=kx. x is the length of the spring now minus its length when it's relaxed and nobody's pulling on it. k is a constant called the spring constant. And it just depends on which spring we're talking about. If k is really really really big, then that means that the spring is very rigid so you should think like car shocks or those springs that, that hold up like a swing outdoors.

A really really really small spring constant means that the spring is really loose, really easy to pull on. You should think like a slinky or something like that. Alright. So let's do some problems. First off, the direction decreases x, it acts to make x smaller because we don't want any distortion at all. It wants to be its relaxed length. So for that reason f the force is negative kx. It's the opposite of k times x. Alright. The magnitude is just proportional but the direction is opposite because it wants x to be smaller. Alright.

So let's do an example. A mass m stretches a spring a distance x. So you should think a spring like this hanging, I hang a mass m on it and it stretches it a distance x and I want to know how far will 3m stretch it? Alright. Now, we don't have any numbers in this problem. But we don't really need them. Look, 3m is going to give a force it's weight of 3 times as much as m. So if the force is 3 times as much, the spring constant is constant, it means x got to be 3 times as much. Easy enough. Alright. Let's go to the next one.

This one's got some numbers in it. A 200 gram mass, stretches a spring 50 centimeters. What is the spring constant? The important thi- there's a couple of important things here. So first of, we're not in SI units. So we got to change to SI units if we want everything to work nicely. So that's the first thing. Second thing, we're going to write down f=kx. I don't care about the direction so I'm not going to write the minus sign. So what's the force? The force is not 200 grams. The force is mg. You got to multiply by the acceleration due to gravity. So we'll have m 0.2 g, I'm just going to use 10. It's 9.8 but whatever. You're going to use the calculator, use 9.8. I'm not going to so 10. Alright. Equals m and I've got k and then x, just like that.