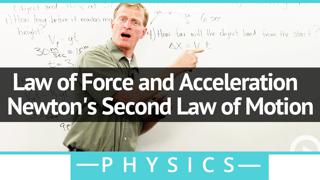 Law of Force and Acceleration - Newton's Second Law of Motion

According to Newton s First Law of Motion, also known as the Law of Inertia, an object at rest remains at rest and an object in motion remains in motion until it is acted upon by an unbalanced force.

The force down on the tennis ball is equaled by the force in my hand pushing up on that ball. If I push the ball in this direction it's going to move. So that's what we're talking about okay this is a pretty common sense example and you can state this pretty simply as stuff wants to do with stuff was doing and any good waiter or waitress knows this practice when they fill your coffee cup, if they know Newton's first law they don't fill it all the way up right but because if I've got your coffee cup and I start to go to the table well that coffee wanted to stay at rest. It's going to stay at rest and it's going to spill off the back end right.

When I get to your table I've got a, I'm in a constant motion and I stop and put it on your table, that coffee wants to keep moving and it's going to splash out of the cup onto your table. So any good waiter or waitress that doesn't spill coffee when they're giving it to you understands Newton's first law of motion, the law of Inertia.