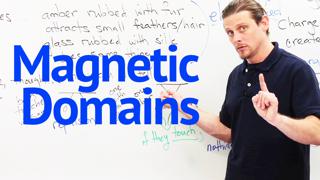 Magnetic fields are vector fields associated with magnetic forces. Magnetic fields are generated by Hard Ferromagnets. Unlike electric fields, magnetic fields always make closed loops and are never created nor destroyed. Though magnetic field lines go out of north poles and end at south poles, within the magnet they form a closed loop. The closer together the field lines are, the stronger the field. When opposite ends of two magnets interact, their field lines connect the north pole of one with the south pole of another, and the two attract. When the same ends of two magnets interact, they repel because the lines cannot cross and are compressed by each other.

Alright, what happens if I take two of the same pole and put them next to each other? Alright let's look down here so now we've got north pole north pole, again out out out out out, out out out out now what's the difference? You know it's just like I did before, well the issue is that now I can't connect them because these guys are all going out so these ones are going to come up and like that, these ones are going to come up and like that. Now just like all field lines they can't cross because the magnetic field that every single location has to be in a certain direction it can't you know be schizophrenic like this oh part of it is pointing that way and part no alright it's got to not cross so these field lines are not allowed to cross and that causes a lot of trouble with that because they kind are forced to go round like this and around like this and down like this and down like this and then these guys are doing the same thing so here you can see that this situation is aggravated if I tried to push the two north poles closer together because these field lines aren't allowed to cross and they're just pushing against each other this creates something that we can call magnetic field pressure and so what happens when you have two like poles and you try to push them together you feel this magnetic field pressure that wants to push them apart, they need to have room to exist on their own and if you try to push them too close together they don't have that room so they're going to complain, so that's magnetic fields.