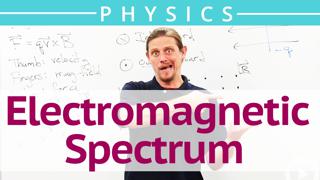 So let's talk about electromagnetic wave well what is an electromagnetic wave? Well it's a wave that takes place in the electromagnetic fields. Now this was something that actually follow from an addition to electricity and magnetism that was first discovered by James Clerk Maxwell in 1864 so let's go through how this works. When we look at electromagnetic fields in a vacuum we find that because of the Kirchhoff Faraday Lenz law if I change a magnetic flux I will generate an electric field. So if a magnetic flux is changing like this then the electric field will circulate around that changing magnetic flux. Now what Maxwell did was he modified Ampere's law and said that a change in electric flux will generate a magnetic field. So what this does, well first off it changes the name of the Ampere's law to the Ampere's Maxwell law and together with that all 4 of the previous laws were brought together and were all refereed to as Maxwell's laws so James Clerk got a lot out of that discovery.

Alright the speed of the wave can be determined from the standard constants in electricity and magnetism. The speed is given by the square root of 1 over mue 0 times epsilon 0, mue 0 is the permeability of free space and is associated with magnetic fields whereas epsilon 0 is the permittivity of free space and is associated with electric fields, so we can see them both together generating the speed of electromagnetic waves. Numerically this turns out to be 3 times 10 to the eighth meters per second or about 300 million meters per second, 300,000 kilometers per second 186,000 miles per second. Put in another way it's about seven and a half times around the equator of the earth in 1 second. So no wonder people weren't able to measure how fast that was in the 1500s the first actual measurement didn't happen until the 1800s. Alright so let's see what makes electromagnetic waves different from mechanical waves. The big thing is that you've got propagation in vacuum, remember that mechanical waves require a medium. They represent a disturbance in a medium like water or air or rock or something like that.

In vacuum you can't, what are you disturbing? Electromagnetic waves have an answer, we're disturbing the electromagnetic field we don't need a medium for that, we can do that in vacuum because electric and magnetic fields exist in vacuum. Now what people used to say is that "there's the medium we just can't see it." The problem is that the way that speeds work with mechanical waves this aether that was proposed to carry electromagnetic waves or light would need to be both very very light and very very rigid to support such a high wave speed. So to put it in another perspective sound waves propagates through aluminum at about 5,100 meters per second. So we're going to need a material that's so much lighter than aluminum and yet so much more rigid that it supports speed not 5,100 meters per second 300 million meters per second.

Alright as with all waves the wavelength times the frequency equals thee speed. In this case the speed is really, really big. Now most of the time we're looking at mechanical waves the frequencies can't get too big because it's associated with the medium having to respond to being disturbed and that takes a little bit of our time. But with electromagnetic waves this is just associated with disturbances and the electric and magnetic fields which are not media. So that means that the frequency can be very high, it's limited only by how quickly we can move charges back and forth. So there're electromagnetic waves that are known with frequencies up to like 10 to the 22, 10 to the 24 oscillations per second which is way higher than any physical medium could sustain. So anyway that's electromagnetic waves.