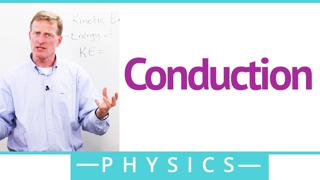 The first one is conduction that should be a term that it sounds familiar to you, that's direct contact where, where molecules bump into each other and pass on that kinetic energy so when we have for example a wire, a hot wire and you put it over a flame, those molecules are packed closely together and they're going to bump into each other and they're going to very quickly pass that kinetic energy and that heat on to you through that wire.

Okay, another type of transfer of energy is convection and this is the actual movement of the warmer particles so this involves the movement of particles, well what does that mean? Well good examples of this are air currents you know that warm air rises and so that's moving out warm air from a low place to a warm place if you've ever been in a house and you notice it's always warmer upstairs that's because that warm air is rising through convection currents. Also our ocean currents move in the same way so in the Gulf of Mexico the water gets very warm that warm air expands and moves and crates what we call the Gulf's stream. Those are both good examples of convection, the movement of warm particles from warmer to cooler locations.

So these are the three important types of thermal energy transfer how energy is transferred from one source to another.