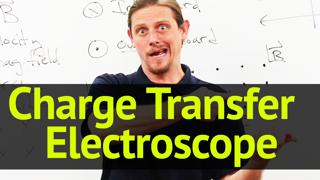 The law of conservation of charge states that electric charge can neither be created nor destroyed. In a closed system, the amount of charge remains the same. When something changes its charge it doesn't create charge but transfers it.

Alright. Let's talk about electric charge and charge conservation. Now this is a really really really old idea. It was first noticed by the ancient Greeks long long long long long time ago and they recognized that when you took some amber and you rubbed it with fur and then you took it into your hair or feathers or other small things, it would attract them, they would jump right off the ground and cling to this amber.

Now later on people realized that glass would do the same thing if you first rubbed it with silk. So these two things were called electrofied. Now, it seems like they act exactly the same way from these little experiments. But it turns out that it's not really the same. How can we tell? Well, one very easy way to tell is by taking two little pit balls and pit balls are little light balls of like styrofoam nowadays. You could use something else maybe, you know 1000 years ago. But nowadays we use a little styrofoam ball that we've sprayed with graphite.

If I touch both of them with amber that's been electrofied or with glass that's been electrofied, doesn't matter, then they will repel each other like this. So they were like that and they spread apart. So that shows repulsion, but it doesn't tell the difference between the two types of electrofaction. But what if I rubbed one with glass and the other one with amber?

Well, in this case, they come together. It's totally the opposite effect, we get attraction. So this is kind of strange. We would not have expected that. Even more than that, if we then allow these two pit balls to touch each other, once they are attracted, they suddenly go back to the way that they were before we even allow them to touch anything. Nothing. So this is kind of strange. The way that people understand this now, is they assign one of these with positive and the other one with negative and they say, "well jeez, if you let them touch, then they're just going to cancel out." Like 3-3 is 0, and it's like you didn't have anything to begin with.

Alright. So let's see how this developed. We end up with this positive and negative. Now Benjamin Franklin actually was the one to assign glass positive. And that meant that amber was negative. And what he said was charge is allowed to move from one thing to another but it can't be created or destroyed. So the way that we understand, when you take amber and you rub it with the fur, the amber loses its positive charge, the fur gets it and since the amber started off with zero, it lost positive charge, it now has negative. Or you could understand it the other way. And this is actually more correct. The fur loses negative charge to the amber and since it started at zero, it lost negative, so now it's got positive. So that's the idea, conservation of charge.

Alright. So let's do a couple of sample problems. These are real easy. Suppose that you've got an object with a charge of 4 coulombs, coulombs are the SI unit for charge. Now I'm not going to define that right now because the definition of coulomb actually involves magnetic fields, surprisingly enough, but, let's just take it for granted that that's the unit that we'll use for charge. So we got 4 coulombs on this guy, 8 coulombs on that guy. Now, let's say that we let them touch and then pull them back apart. And now we've got 7 coulombs on that guy. How much we got on that one? Well, jeez. There's 12 total, seven's taken up by that one, 5 left over. Easy enough.