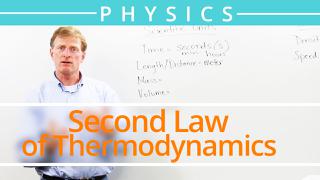 Conservation of energy, sometimes called the first law of thermodynamics, states that energy can neither be created nor destroyed. Energy, however, can be transferred from one form to another.

The conservation of energy this is sometimes called the first law of thermodynamics. Basically what it says is that energy cannot be created or destroyed but it can be transferred from one form to another. So what's an example of that? Well I can take gasoline which is chemical energy I can put it into a car and I can convert that into chemical energy, the motion of the car. Or I can take potential energy in a compressed spring and I can use that to fire an object and convert that into kinetic energy. So in these systems the overall energy remains the same it's just moved from one form to another form, okay? So often times when we solve Physics problems we'll say for example say the potential energy, the initial potential energy which I'll call PEI let's say if an object at a certain distance above the ground is going to equal the kinetic energy final of that object right before it hits the ground okay so this is a good example of the conservation of energy with the first law of thermodynamics.

Okay so what's the problem while we might look at something like that? Well let's say we've got an object, let's say TV this might be a fun thing to do at home but don't try this at home. 5 kilogram TV is dropped from a 2 meters stand and I want to know what the velocity is when it hits the ground okay? Well so I'm giving you potential energy here where it's positional energy right it's a certain distance above the ground and it's going to accelerate until it hits the ground and when it does, it will have a certain amount of kinetic energy. So let's say our initial potential energy is going to equal our final kinetic energy okay? So first off what's our initial potential energy? So well the formula for potential energy is PE equals mass times force of gravity in this case we'll say 10 meters per second squared times the height of the object.

Okay, so let's look at that we've got the mass of the object is 5 kilograms and the height is 10 meters per second squared and the height of the object is 2 meters. Okay, so we've got a mass an acceleration and a distance and that's going to give me a total amount of energy. If I multiply these out I get 5 times 10 times 2 equals 100 and the unit for energy is joules, 100 joules of energy in that TV up in that distance okay. So that amount of potential energy equals the amount of kinetic energy right before it hits the floor okay 2 meters below it. So let's go ahead and say I've got my initial potential energy and it must equal my final kinetic energy there we go. So my initial potential energy was 100 joules okay so what's my final velocity?

Well remember the formula for kinetic energy is one half times the meter, I'm sorry one half times the mass, and then mass times the velocity squared okay. So if I carry that down and plug in my numbers 100 joules equals one half times 5 kilograms times v squared because in this case we want to know what the velocity is the final velocity okay. So now to get rid of this in front of my velocity right I've got one half times my kinetic energy that must equal 2 times my initial potential energy right and if I'm multiplying it times 5 that must be the same as dividing this by 5 kilograms okay which equals my velocity squared. Okay so if I multiply that I get 200 and I divide that by 5 I get 40 and in this case when I reduce the units since there was a unit of mass in here I'm just ending up with a distance times a distance squared so 2 meters squared over seconds squared and that equals v squared.

Okay so, solving for v, v is going to equal 6.32 meters per second. That's the final velocity of my TV right before it crushes into the floor. Okay so this is a good problem with potential energy being converted into kinetic energy and showing us conservation of energy the total energy in the system does not change its just being converted from one form into another and that's how you use kinetic energy and potential energy to solve a problem related to a conservation of energy.