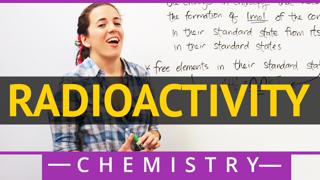 One of the main differences is, is that in chemical reactions bonds are broken and formed and that's what makes the chemical reaction occur. They're broken and formed between two different atoms while nuclear reactions they are nuclei that emit particles and or rays into the atmosphere around us so it might be one single atom that's changing and emitting something that changing the nucleus inside and emitting something out in the atmosphere around it so it might not having anything to do with other atoms at all just one atom alone.

Chemical reactions are, the rate of the chemical reactions influence the concentration, temperature, pressure and catalysts. The nuclear reactions are unaffected by these things. The nuclear reaction rates can are as large as millions and millions of years like uranium decay or thousands years like carbon decay or like milliseconds so these guys are not affected by the temperature doesn't make it different by the concentration by the any catalysts can't help it nothing can actually increase or decrease the rate of nuclear decay like you can with chemical reactions.

So these are the main differences between nuclear and chemical equations and if you want to learn more of there's more videos to come.