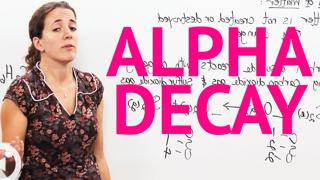 There are two types of beta decay: beta-plus decay and beta-minus decay. In beta plus decay the nucleus emits a positron (a positively charged electron) and a neutrino (a proton that changed into a neutron), resulting in the element before it on the periodic table. In beta-minus decay, the nucleus emits an electron and an antineutrino (a neutron that changed to a proton), resulting in the element after it on the periodic table.

Alright when you're dealing with nuclear reactions or reactions that within the nucleus of an atom, there is several different types reactions that occur can occur one of them being beta decay and this is when a neutron decomposes into a proton and an electron. Okay so why does this happen? Well the neutron and proton ratio is above the band of stability and if I go with band of stability over here it's this is a black kind of grayish line we'll make sure our neutron to proton ratio falls within that grayish line if it doesn't then something is going to happen it's either going to it's going to start radiating some sort of energy and things are going happen with the nuc- the nucleus to make it more stable and to lie within the band of stability.

Well let's look at the stable atom we know that ca- carbon 12 has a 12 maximum number of 12 and 6 protons so neutrons is 6 and the protons is 6 making a total mass number of 12 and we have ratio is 1 to 1 which is what we like. We like a ratio of 1 to 1 at low atomic numbers and carbon is low atomic number so it has a ratio of 1 to 1 so it's not going to actually undergo any sort of nuclear radiation that's totally okay it's safe. But then we go over here to carbon 14 an isotope of carbon 12 protons are the same 6 protons and then we have 8 neutrons and 6+8 is 14 so our ratio neutron to proton ratio is 1.33 which is a bit high for the atomic numbers of such low magnitude 6 so what we're going to have to do is get rid of some of those neutrons so inside the nucleus what's going to happen is one of the neutrons is going to decompose and it's going to decompose into a proton and an electron.

Notice that when positive one and negative are going to come together to make a neutral charge they were to make sure these actually add up and this making the [IB] the yield sign and equal sign so I might with I might want to put that up there just so that we can be clear on what that means okay so what exactly is happening? See for carbon 14 with a mass number of 14 and atomic number of 6 it's going to decompose and this is going to happen and it's actually going to it's going to emit this electron it's going to be a high speed electron which is going to emit into the atmosphere not only is it going to emit electrons in the atmosphere which are pretty which are pretty bad for the environment pretty bad for us but it can be blocked by things like foil or things something a thin material can actually block this so it's actually not that damaging but it does emit something to the atmosphere and also emits high speed high energy particle, energy particles, called gamma rays this is energy because this this is coming from a high energy system now well having going to a low energy system and the energy is going to be released as gamma rays so that's actually was the danger is about about this radiation. Anyway so it's going to emit go down to a nitrogen with a mass number 14 and atomic number of 7 so that actually mutate from carbon to nitrogen and let's look at this proton and neutron ratio at this neutron to proton ratio so the number of neutrons we're having here 7 so we have we're going to look at our neutron to proton ratio for nitrogen and we have 7 neutrons and 7 protons so this is 1 to 1 ratio and so this is wholly okay so now we stabilize this this carbon atoms can be a nitrogen atom so this is just a one way that an unstable nucleus can start becoming more stable by emitting beta particles or electrons.