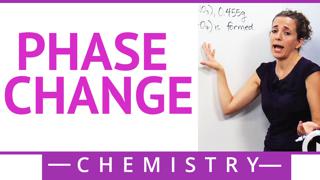 The three states of matter, also called the phases of matter, are solid, liquid and gas. Matter changes phases based upon thermodynamic principles like enthalpy and entropy. At room temperature, different elements are in different states because of their intermolecular forces.

Solids have a definite shape and a definite volume as you should know but are these particles in motion? Your first thought might be no they're not in motion but in actuality they are. All the bonds and all the atoms actually have constant vibrations going on within the atom within the solid. We might not be able to see them or detect them but they actually are happening at the atomic level. The only time these vibrations actually cease is at zero Kelvin or absolute zero or -273 degrees Celsius and in reality we actually would never even reach that point so in reality that is actually like a theory it's a theoretical point so yes all of these particles are still in motion and what's up with the density? The density of solids you're, we think the density is actually the compaction or how tightly closed these particles are to each other in a given volume so solids you would think have actually mostly most of them do have a higher density than their liquid and solid counterparts except in water. Water is a rare exception where the density of the solid or ice is actually lower than the density of the liquid that's not the way that hydrogen bonds and the way it actually like forms its solid its actually less dense and its liquid which is the reason why ice floats. Most solids actually don't float in their liquid.

Let's talk about the different five, the five different types of solids you might come across in Chemistry class the first one being atomic solids. Atomic solids are just atoms that are that are attached to each other in a solid form they are they're pretty soft they have a low melting point and they're actually a poor conductors meaning they do not conduct electricity they don't they don't have those free floating electrons that are able to conduct electricity. These are atoms might be group 8 elements neon, argon things like that. They actually form atomic solids.

Next would be molecular. These molecular compounds come together and they're intermolecular forces are what's keeping them all together, their molecules also take place in this and those are guys they're fairly soft they too have a low melting point and they also do have poor conductivity because they don't have these free floating electrons and those are typical things like water, sugar, ammonia things like that, there's there's molecules that are held together through IMFs or through intermolecular forces hydrogen bonding.

The fourth one is ionic compounds; ionic compounds are ion, ionic solids are all made up of their ions cations and anions all bound together through electrostatic forces. These guys are hard, they're brittle, they have a very high melting point it's really hard to separate those ions from each other and they too are poor conductors when they're in a solid state. If you put their solid state in water making it a solution, that actually makes their conductivity extremely high because those guys separate from each other and we have those access to those electrons but in just the solid itself, they're actually very very poor conductors. Any type of ionic compound is what I'm talking about; table salt, calcium carbonate things like that anything that's ionically bound to each other.

Next type of phase is liquids, liquids have no definite shape and they do have a definite volume. They have characteristics one of them being fluidity. Fluidity means the ability to flow so things that they have over solids is they actually can flow over it over themselves along along with gases, gases can do this too, gases can actually deal with this better than solids can oh sorry than liquids can. But the opposite of fluidity is viscosity its how much resistant to flow it is how slimey it is how much it doesn't like to flow so the bigger the size the larger the viscosity or the larger the more likely it won't flow so let's take these these a hydrocarbons for example. This large hydrocarbon is not going to flow as much the intermolecular forces the London dispersion forces that hold these guys together are actually a little bit stronger here because there's more electrons than in its smaller hydrocarbon over here. This guy actually has a lower lower viscosity meaning its flow is greater than this guy which has a higher viscosity. As you increase temperature, the viscosity also decreases so if you increase temperature its fluidity does increase its able to flow more its able to break those IMFs or those intermolecular forces unable to flow more making visc- viscosity lower. Yeah so these are indirectly related and these guys size and viscosity are directly related.

One of the last thing we're going to talk about in liquids is surface tension. And surface tension is inward the measurement of the inward pull of a liquid upon itself so I have one small illustration down here for you to illustrate this. These guys are all water molecules and we have a negatively charged oxygen a positive charge hydrogen and these dotted lines are hydrogen bonds that detect that that that it does attach them but like bring them together and so then what happens here are the surface of the water so here is the water down here and here is like air. If you're going like a crick walk and if you're go you're going like hike in the woods you might see you might come across a pond and you like see bugs kind of walking on water, how do they go about doing that? Well here is an example of a bug's leg and notice the bug barely touches the water and it has a very very small place where it touches the water on it's leg and because it has a small place this hydrogen bond actually keeps the water together and its able to make the bug walk on top of it that's because the surface tension or this or this bond is actually not bond but its attraction. It's actually pretty strong compared to this light weight of this bug so it holds it up so this surface tension is different for each kind of liquid water has a pretty good surface tension so its able to hold the bug's like on top of it.

And lastly are gases, gases have no shape and no volume and there's actually a whole ton of laws and a whole ton rules that's dealing with gases and their behavior and we're going to go into that in the next couple of videos so this actually in a nutshell talks about the three states of the matter; solids, liquids and gases and hopefully this makes sense.