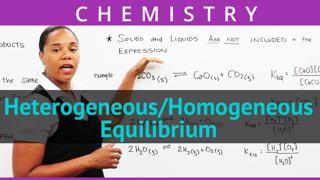 Okay so let's kind of deal with this last here bit a little bit more in detail. So let's assume we have a very simple reaction where a your reactants or in equilibrium with 2 mols of b where are your products. And so if we break this up into 2 separate components we'll look at the forward reaction so the reaction were a goes to form 2 mols of b we'll say it has some rate constant case of f for the rate going forward and if we wrote the rate equation for that, you'd have the rate of the forward reaction is equal to case times the concentration of a we calling that for rates of reactions is dependent on the concentration of the reactants not the products. So then for the same equation 2 for the backward reaction we'd have, what appears here is our products but here if we're writing it out separate it's on the side of our reactants so 2 mols of b with the case r so the rate for the backward reaction forming a so then our rate would be rate of sub r is equal to case of r times the concentration of b squared remembering that this coefficient means that it must, you must square the concentration.

And if this happens to have been a 3 in front you would cube so forth and so on. So then equilibrium, the definition of equilibrium is that the forward reaction, so the rate with which 2b is formed is equal to the rate with which a is formed. So right here the forward reaction is equal to the backward reaction. So if we broke that out and wrote it in terms of equilibrium, we basically would be solving for a constant and so we'd solve here and say b squared over well the concentration of b is squared over the concentration of a is equal to case of f over case of r and that, that would equal some constant and it would find out in the next segment that this is the equilibrium constant. So basically the equilibrium condition can be achieved from either direction, either from going from reactants here to products or products back to reactants. So let's kind of look at a graphical depiction of that, so here on the y axis I have concentration in mols per liter and then along the x axis I have time with increasing time going to the right.

Similarly we can look at that based on weight, here on our y axis and time on our x axis and again the 0 point so recall again that a were our reactants and so we see the rate here starts high and starts to decrease as the rate with which our product b is formed starts to increase until they both level off and an equilibrium is reached so that you can see that the rate of the forward reaction is equal to the rate of the backward reaction. And that's the definition of chemical equilibrium.