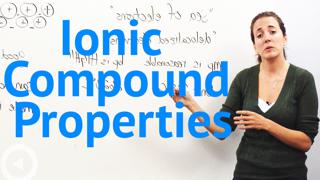 In an ionic bond, two ions are held together by electrostatic force. These two atoms are trying to attain full valence shells of eight electrons. One atom has too many electrons and another has too few so one atom donates electrons and the other accepts them. The donor atom forms a cation, or positively charged ion and the other forms an anion, a negatively charged ion. The two are held together by the electrostatic attraction between opposite charges.

Alright so we're going to talk about ionic bonds, an ionic bond is actually an electric celiac force that holds 2 ions together and don't forget ions are charged particles they actually give or receive extra electrons. So an ionic bond is a force that holds these ions together in a crystal it's the ratio of ions. So what exactly are ionic bonds consisted of? Well they actually make up, metals and non-metals actually make up ionic bonds, metals are cations or which are positively charged ions which means they give off their electrons and actually give their electrons to the non metals which we're going to all the anions or the negatively charged particles. So they transfer their electrons from the metals to the non-metals. Alright so let's take one for example, let's do sodium we know sodium has the electron configuration of Neon 3S1 and that you know it comes with chlorine this is typical table salt the one that you put on your dinner to flavor your food. So chlorine has electron configuration of Neon 3S2 3P5 so what happens is sodium is going to say okay "well I'd rather give up this electron so I can have the stable configuration of Neon" and chlorine will like "well I would like to get one so I can have a stable configuration of argon." So what's going to happen? Well the sodium is going to be super nice and give up its electron to chlorine.

Chlorine is then going to have a configuration of 3P6 which is great because that's the configuration of argon, very stable and sodium is going to get rid of this and it's going to have a configuration of Neon again very stable so everybody is really happy. Pictorially you can describe this using the Lewis dot diagram sodium has 1 valence electron, chlorine has 7 valence electrons and what happens is sodium is going to give up its electron to chlorine making it up a total of 8 electrons around it and sodium has none which is fantastic. Sodium becomes a positive ion, chlorine becomes a negative ion coming together to what we now know as table salt sodium chloride.

Okay so how do the other things come together? Well if you look over here we're going, alright these are groups that, these are the representatives of the groups 1 through 8 in the periodic table we're going to exclude the transition metals because those are kind of varying and get a little tricky so we'll talk about those another time. But if you look at groups 1 through 8 just the representative metals or elements we know that all electrons want to have the same configuration as a noble gas. So how do we get that? Group 1 has, could either gain 7 more electrons or lose 1 electron. So it's probably going to lose that 1 electron making it a +1 charge. Group 2 they could either gain 6 or lose 2 and as you guessed it there are going to lose those 2 making it a +2 charge.

Group 3 they could either lose 3 or gain 5, they're going to lose 3, things in group 4 or the carbon group typically don't make ion so they're not going to gain or lose electrons normally so we're going to predict have a charge of 0, group 5 can either gain 3 or lose those 5 and this is the one that's actually going to gain those 3 making it a negative 3 charge. Group 6 is going to gain those 2, group 7 is going to gain that 1 and group 8 we know loves to be the way it is, we're not going to do anything to group b, they're the noble gases we're not going to touch those guys. Okay so just knowing that we can then predict how these guys are going to come together to make a neutral ratio, because ionic bonds are all neutral unless typically, unless noted otherwise and we're going to say they're all neutral. So things in group 1, sodium in group 1 we're going to say it's a +1 charge. Nitrogen's in group 5 it's a -3 charge we want to make this neutral, so how many are going to come together to make this a neutral compound? Well an easy way to go about doing this, is this number ignore the sign is going to be how many sodium atoms there are, this number is going to be the how many nitrogen atoms there are because if we do +1 times 3 and negative 3 times 1 we're going to get an overall charge of 0 which is great which is exactly what we want. So we're going to end up with a ionic compound that looks like this Na3N notice I didn't put the 1 there is just unnecessary the fact that the nitrogen is actually there tells us that there's one of them there at minimum. So this will be our ionic combination of sodium and nitrogen, so let's do aluminum, aluminum is in group 3 which means it's a +3 charge, sulphur is in group 6 which means the minus 2 charge doing our trick we're going to just exchange these numbers making it Al2S3 easy enough.

What if you get a situation where this happens so we have calcium which is in group 2 which is a +2, oxygen is in group 6 which is a minus 2. We could just exchange those numbers that we've been doing and get Ca2O2 but we'd like to have a lowest ratio possible we don't want this, so we're going to make sure these are the lowest ratios. So we can reduce this two to 2 to make it CaO so we don't have to write this 2,2. So anytime you want to make sure that these are the lowest ratio possible in this case, they're and this is how you make ionic bonds.