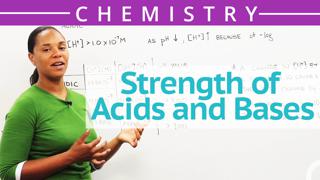 Acid and Base Properties - Concept

Hi guys. So let's do some discussions of acids and bases and let's just start with the basic properties of what is an acid and what is a base, so an acid is a substance that ionizes in aqueous solutions to form hydrogen ions which we write as H+ and thereby it increases the concentration of protons in solution.

On the other hand, a base is a substance that accepts or reacts with protons in aqueous solution and therefore it produces hydroxide ions so you'll notice here that protons have a plus 1 charge and hydroxide ions have a -1 charge so there are two different types of acids and bases. We can talk about some are named arrhenius or we can talk about the bronsted-Lowry acid base definitions, so let's do arrhenius first so this is kind of a more old school definition and it's limited because it only applies in aqueous solutions which does make it applicable to all situations so an arrhenius acid is a substance that when dissolved in water increases the concentration of protons in solution, conversely the base is the substance that when dissolved in water increases the concentration of hydroxide ions in solution okay so when remember that with arrhenius it only applies to aqueous solutions and it deals with for the acid the increase in concentration of protons and for the base the increase in the concentration of hydroxide ions.

So molecules of different acids can ionize to form different numbers of proton ions remember that when I say something ionizes I'm saying that it breaks up into it's respective plus and minus ionic species so for example we have here HCl and HNO3 so hydrochloric aid and nitric acid two strong acids very common and you see that each have one proton so we call those monoprotic acids mono meaning one proton that can be donated to the solution so these guys they hold one proton per molecule of acid. On the other side you could have a diprotic acid so here is sulphuric acid which is H2SO4 which means it's got two protons to donate to solution so diprotic acid di for two and it yields two protons per a molecule of acid. You can go up and up there's H3PO4 various different types of acids but just so you know here these are the two most common that you'll probably come in contact with in your early Chemistry days and that's pretty much the basic properties of acids and bases.