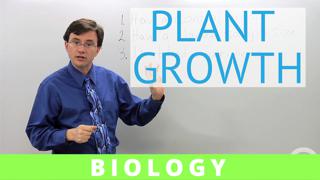 When looking at the structure of plants, we can classify the plant structure into two major regions: the stem and the roots. The plant stem is typically above ground and supports the plant leaves. The stem is comprised of the protective dermal tissue, the ground tissue and the bundled vascular tissue. Plants typically have one primary root and secondary root branches that contain thousands of root hairs. The roots have several important parts such as the epidermis, cortex, endodermis and vascular tissue.

Like most multicellular creatures, plants have a particular structure as to basically how their body kind of goes together, and there's two major regions to a plant. There's the stem and then the roots. Stem typically is above ground although some plants have horizontal or even underground stems and they generally are helping support the leaves, then the roots are typically below ground and they're specialized to absorb water and other minerals from the soil. They are connected by vascular tissue that helps transport the materials being created by the leaves and the stem down to the roots and transport materials from the roots up to the stem and leaves.
Now the stem is made up of three different tissues, there's the dermal tissue that is kind of like our skin and it protects the underlying other tissues. The Ground tissue helps give a little bit of structure but sometimes it's involved in doing photosynthesis, then there's the Vascular tissue typically made of xylem and phloem and those get arranged into bundles. Now depending on the species of plant you may have monocots where you'll have the vascular bundles that you can see here in this cut a way view of celery, you can see they're kind of scattered somewhat randomly versus the rings of vascular tissue that you'll see in dicotyledons or dicots.
Now in the stem you'll have these regions called nodes and that's where branches would just come off of and you'll have the leaf coming off of there and the leaf you can see here is held on by the petiole to the stem, and you'll also have what are called buds where new leaves or new branches could grow from. The internode is the region between nodes hence the name inter which means between and node.
Roots on the other hand they have one primary root with a bunch of secondary roots coming off of it with thousands of root hairs coming off of individual cells. Now the purpose of the root hair is to give a much greater surface area to volume ratio to allow the plant to absorb a lot more water from the soil. It has four layers, the epidermis which again is kind of like our epidermis and that it protects the growing root and keeps unwanted material out. There's the cortex which is usually used for the storage of food such like the cortex that makes it much of a potato. Then there's the endodermis that's a thin layer a single celled layer that helps control what can come in and out of the vascular bundles, this is your last security station essentially and it has this layer called the Casparian Strip which forces materials out of the cell walls and across the cell membrane of the endodermis. Finally you have the vascular tissue that helps transport materials up and down the entire plant.