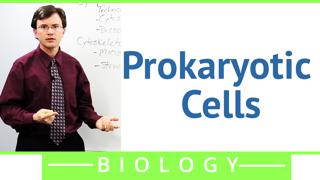 A cell is the basic unit of life and all organisms are made up of cells. With regard to an overall cell overview, there are several types of cells. One important distinction is between prokaryotes and eukaryotes. Another is between animal cells and plant cells.

In Biology there is a concept known as the cell theory which is the idea that all living things on this planet are made up of cells or cell products, so this ranges anywhere from something as small as a bacteria to a something as large as a regular tree. We're all made of cells; they're considered the basic unit of life. By basic unit I mean kind of like have a brick is the basic unit of a wall. I could build a very small wall out of one brick or I can make a large wall out of hundreds of bricks. Similarly, a bacteria which is a unicellular creature is made out of one cell while something like me I'm multicellular I'm made out of trillions of cells.

Now the average cell is roughly 80 micrometers in size. Micro means one millionth so that's 80 millionth of a meter. if you've seen a millimeter that's pretty small take a millimeter and chop that off into a thousand pieces and then you got yourself a meter I'm sorry a micrometer, so that's really small the smallest dot you can make on a piece of paper is huge compared to this, so a lot of times kids ask me "why are cells so small?" The answer to that is something called the surface area to volume ratio hypothesis. Now if you're a cell the only place for you to get in material is through your surface, that's for you to take in food or for you to dump out waste, so if we take a look at this cube let's pretend it's a cell, it has a dimension of one by one by one centimeter. If we calculate its surface area we find that its surface area is 6 centimeters square. We calculate its volume we find that it is one cubic centimeter, so if we look at the ratio here we have a surface area to volume ratio of 6 to 1 that means every one cubic centimeter itself its able to suck in materials through six centimeters worth of skin or membrane.

What happens though if I take this one big chunk and I chop it in half? Now I've opened up the inside and I can get material in through those two new interfaces, so now the surface area equals 8 square centimeters while the volume equals still a total of one cubic centimeter that's the ratio of 8:1. Now it can suck in more materials per second because it's got more surface to do that sucking in through, so let's take a look at some of the basic kinds of cells and see what are the common characteristics that they all share.

If we take a look here at this bacteria we see a number of different structures but one of the first ones that we'll see once you go through the outer capsule on the cell wall is you'll see the cell membrane, that's what acts like the skin of a cell and all cells on this planet have at least a cell membrane. Once you're through the cell membrane in this diagram you see this bluish stuff, that's the cytoplasm that's the gooey liquid that the rest of materials are floating around it. Within there you'll see this thing here that's the tangle up DNA chromosome of this bacteria. You'll also see a number of these little small guys floating around those are ribosomes the little factories that build proteins for the cell.

If we take a look at a animal cell, we'll see similarly on the outside you'll find the cell membrane it doesn't have the cell wall that the bacteria did but it does have the cell membrane that again controls what can come in and what can go out. Once you pass through that membrane again you have the liquid cytoplasm which technically is the entire region from here to there till you hit the nucleus but most people when they talk about the cytoplasm they're just talking about these side we saw the liquid there. Floating around again in the cytoplasm and stuck on the surface of these wiggly things here are the ribosomes to build proteins and inside the nucleus we have the DNA.

If we take a look at a plant cell. We see again a similar structure we see that cell wall that gives the shape and structure and protection for the plant cell just like it help protect the bacteria we see the membrane immediately underneath that and then we have our cytoplasm with yes you guessed it a bunch of ribosomes floating on inside and deep inside the nucleus we have all that DNA.