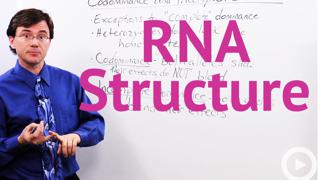 DNA structure is what is called a double helix. DNA consists of two strands of nuclotides connected by pairs of bases. These strands "point" in opposite directions and are twisted into a helix shape. Each nucleotide subunit contains a phosphate group, a pentose sugar and a nitrogenous base. The four nitrogenous bases in DNA are adenine, thymine, guanine and cytosine.

There is a phosphate group which has a negative charge, there is a pentose sugar which simply means it's got five carbons. They're actually numbered this is carbon 1, 2, 3, 4 and carbon number 5 so the phosphate is attached over here to a carbon number 5 and then over there you have a base that contains nitrogen in it so they're they often call it a nitrogenous base. Now Both RNA and DNA use the pentose sugar what makes DNA and RNA significantly different is the actual sugar they use.

DNA which stands for Deoxyribo Nucleic Acid uses surprisingly enough deoxyribose. What is the deoxy mean? That means there it is lost in oxygen that ribose sugar has and that happens to be from carbon number 2 so you can see here on carbon number 3 there is an OH group over there, there's only a hydrogen alright so what happens is that you'll have like I said the phosphate is in the sugars but that nitrogenous base it comes in four different versions. There's a nitrogenous base called Thymine which is typically abbreviated t, there's a nitrogenous base called Cytosine which is you guesssed it! c Adenine is abbreviated a and then guanine is abbreviated g so you can see here the four different nucleotides that can be arranged in long strands to form DNA molecules.

Now how do I connect this nucleotide to that nucleotide there? That was part of the work that James Watson and Francis Crick tried to figure out when they were putting together their model of DNA. What they figured out amongst other things is that the phosphate from one nucleotide would join to the sugar of the next nucleotide. Now the 5 and the 3 here just referring again to the carbons of the 5 carbon sugar so you can see you'll have a phosphate here sugar there phosphate sugar phosphate sugar that's why when you form these long strands they often talk about the sugar phosphate backbone okay? So sticking out from the sugar phosphate backbone you'll have the nitrogenous bases and it's the sequence of the a's, t's, c's and g's that determines the genetic code just like the sequence of letters in a book determines the meaning of that book.

Now you may have heard about something called a double helix that's because DNA doesn't form a single strand a molecule of DNA is actually made out of two strands. What holds them together are hydrogen bonds between the nitrogenous bases and one of the things that you'll have to learn in class is something called the base pairing rules which are named after Aaron Chargaff's so they are called Chargaff's rules and that's adenine will always join to thymine by two hydrogen bonds, cytosine will always join to guanine by three hydrogen bonds, so what happens is that these two strands are held to each other. Now something else to point out is notice up here this phosphate is up, over there the phosphate is pointing down so they're arranged in opposite orientations like this. That terminology is called antiparallel this would be parallel this is still parallel like in Geometry but because there is an orientation they're called antiparallel. I sometimes think of these strands kind of like a conga line this is the person on the front sticking out the five fingers the phosphate and up here they're shaking their sugars so you have the head of the line the back of the line and here I have one conga line that's heading this way that conga line heads the other way.