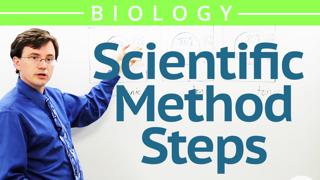 Biology is a natural science that studies the growth and function of life and living things. It studies everything from the basic building blocks of life to the interactions between communities and populations. Biology depends on many elements of Chemistry, since important physical processes rely upon chemical reactions.

To someone new to Science, sometimes all the various divisions can get confusing but at its most basic level it's actually pretty simple. There's just Physics, Chemistry and Biology. Physics is study of forces and motions. Things like how does a radio work or how do planes fly? Chemistry is the study of atoms, so you would learn how to deal with the cool the demos, with mentos and a diet coke. Biology, the coolest of all the sciences, is the study of living things and how they interact with their environment.

Now, within Biology there's many subdivisions depending on what you're studying. Molecular biologists and biochemists are the smallest level. They're studying molecules like DNA and proteins and figuring out how do they impact the entire organism. Cell Biologists, they study how cells work while somebody who studies Physiology looks at how organ systems work in order to keep the body alive. At the next stage up you'll have the Geneticist, who study how the genes that your parents passed on to you influence your traits and how you in turn will pass those traits on to your children while an evolutionary biologist will look at the genes of an entire population of organisms and look at how from generation to generation to generation which genes are present et cetera may change depending on who survives, depending on what's going on with the environment. Perhaps the biggest level of all is Ecology which studies how organisms interact with each other and how they interact with their environment. This can range from doing things like going to a forest and studying all the different animals and figuring out who eats who, or something like George Washington Carver when he figured out that by planting peanuts in a field, a farmer could actually add nutrition to the soil to help all the other crops grow.

Now, it doesn't really matter which form of Biology you are studying, whether it's Marine Biology to Biophysics. All Biology is about the study of us living this, whether we're a bacteria or people and how we work and interact with each other.