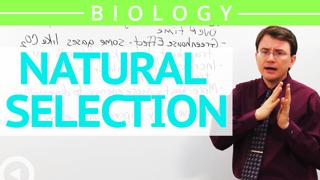 Darwin's Theory of Evolution states that groups of organisms will undergo genetic changes over time due to the process of natural selection. Darwin's theory says that organisms which are most fit for their environment survive while unfit organisms die, changing the genetics of a species until that species is well adapted for its environment. Variations in a species' genetics that lead to evolution often come from mutations.

For thousands of years human beings have been interested in the world around them and one of the things that has been noted is that over time things seem to change, there's this process that goes on, in the Biological world of evolution, and what evolution is the genetic change within a population over a long period of time. Now scientists for quite a long time were just sitting there trying to figure out how could this happen? What's the mechanism that causes these changes? And if you've ever seen one of those little fufu dogs that Paris Hilton carries around in her purse you know there's no way that happened in nature. Something caused that to happen, and so one scientist by the name of Lemark came up with an idea or actually he was just the best one that explained wasn't his idea he was a philosopher as a little side note.

And Lemark explained this idea of acquired inheritance and his idea as explained by him was that say for example Giraffes, how did Giraffes get their long, long necks? Well his idea was that they would stretch their necks up to try to get the leaves and every generation would stretch and stretch and stretch until finally we have the modern Giraffe. When we think about that now we go, what? If I dye my hair purple my kids won't come out with purple hair unless what I'm using is mutagenic chemical that will make it purple.

And we are selecting for those that we want with the traits that we want getting rid of the ones that we don't want. Well Darwin realized hey if humans can do that artificially then why can't nature do it. And so we came up with this idea of natural selection, so he defined his theory of evolution as the idea that groups of organisms will undergo genetic changes over time due to this thing called natural selection. And he realized that if you give this enough time and when I say enough time that's at the geological scale so this is centuries, thousands of years, millions of years. If enough changes occur over time a long time this can create new species from pre existing species.

Now let's look a little bit more closely at natural selection and see what that is. Natural selection is the idea that those who have a genetic trait that increases their chance of having children or offspring they'll pass their genes on more than those who don't have that genetic trait. This is often confused as survival of the strongest, it's not based on how strong you are it's how reproductively fit you are. What's your chance of having your children live long enough for them to reproduce as well? For example if you think back to England during the time of the crusades who was the strongest individuals? The knights sitting there in their armor, mighty muscles. These guys would wear over a hundred pounds worth of equipment and they could stand up and fight. They were really tough, but they would go off on the crusades for decades leaving their little witty serfs behind saying "don't worry my Lord I'll watch the castle... and your wife." This probably led to great changes in the composition of the population when the knight came home and after a decade away in the woods met his 8 year old son.

Now modern scientists have realized that there's not just natural selection, but there's another factor called genetic drift which is the idea that sometimes if you have a small enough group rather than having some people die or some organisms die because of particular trait they do or don't have is just because of random chance. I'm in a room right now with lots of lights and if some of them explode and kill me that wasn't because of my incredible wit or intelligence or my Tom Cruise like looks, it's because I happen to be around a bunch of lights. And that would have removed my genes from the population, whereas if we're talking about a larger group rather than just the individuals in this room. If we're talking about the population of the entire United States my death has relatively little impact.

Now what's some of the evidence that Darwin used to come up with his theory of evolution and some of the evidence that scientists use nowadays in order to construct our better understanding of how new species arise from old ones. Well fossils are prime examples as some of the pieces of evidence that Darwin looked at when he was assembling his theory. He went around the world on a ship and he saw fossils of creatures that obviously were not alive today and he started realizing hey these species are gone but they show great resemblance resemblance to some of our modern species. He found giant versions of sloughs I mean the size of like a Rhino but modern sloughs are nowhere near that big and you realize hey those giant sloughs might be the ancestors of our modern sloughs.

What might have caused those changes? Embryology if you at the development of different kinds of creatures you can see changes as they grow and develop from the fertilized egg to the full juvenile offspring. You can see how they develop and scientists haven't been able to figure out those with similar development in their embryo stage are likely more closely related. Comparative anatomy, you look at my hand, you look at the wing of a bat you can see bones in the wing of a bat that look very much like the bones in my hands just elongated with a lot more webbing than me, whereas if you look at the wings of a bee and my hand you don't sit there and go wow I look really closely related, it's not my Aunt Bee.

Finally molecular Biology is this major new tool that in the last couple of decades has revolutionized our understanding of our evolutionary past. Because we can compare the genes themselves to each other rather than getting caught up in outward appearance we can look at who shares the DNA with whom I mean if people can understand DNA evidence to demonstrate whose your daddy or who is your baby daddy then you can surely see that if we share DNA with another species then we're probably related to it. Plus scientists have been looking at how various proteins work and using those to figure out who is most closely related. So here's is some of the evidence for Darwin's theory of evolution.