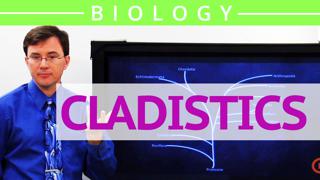 In Biology, classification is the way to organize living things based on evolutionary relationships. Traditionally, we organize species into the standard hierarchy of kingdom, phylum, class, order, family and genus.

People love to classify things to group them into one category or another and when people first started looking at the world around us we started saying, okay. There is these things that are alive, lets group them. And they classified them into a what they thought made sense. There was things that can run after us and chase us or we can chase after them. We call those animals. Things that don't run away and we can just walk up to them and kick them and eat them, we call those plants.

Well, that worked but then there's things like fungi which after a while we started realizing are plants and then there is some animals which dont run away. For example sea anemones, if you have ever been to a tide pool they don't run away. So things started getting a little bit more complicated and people weren't sure how to do it. Then some people started realizing hey, lets group them into similar categories and started thinking about how can we arrange these and ultimately came up with systems that started grouping organisms based on their evolutionary relationships much like we do with people. We group people into their families and then larger families and so on and so forth. And it's just a simple way of organizing things.

Now initially, like I was saying, some of those groupings those evolutionary classifications were based on relatively simple characteristics. And as we've developed our understanding of how evolution is occured on this planet, the scientists are constantly reclassifying things and even changing the entire classification system. And that's where the idea about domains versus kingdoms comes in.

If we take a look over here. We can see the traditional five kingdom system that we now think of as tradition but it's actually revolutionary at its time. And with the traditional five kingdom system there's the kingdom of the bacteria, the monera. Then there's the kingdom of protista which is things like kelp and amoeba. The plants which you probably recognize, the fungi which include things like mushrooms and yeast and then our favorite the animals, animalia.

Well, scientists are starting to realize that even though there's a bunch of bacteria, they really don't look very similar. There's a big division between them in ways that they work and big genetic differences between them. And so scientists have come up with this larger category called domains, where all of these kingdoms, all are subsued into a larger domain called eukarya. Why? Because all of these creatures are eukaryotic, which means they have a nucleus in their cell. These guys are prokaryotic which is why originally lumped together in one kingdom. But they're now divided into domains called bacteria or sometimes eubacteria and archea or the archea bacteria.

Now, once you get that, how do you understand the classification past the domain system? Well, let me show you what it is over here. So the typical or standard hierachy is to group things one of the largest categories like I said is kingdom. Within each kingdom there is many phyla. An individual one is called phyllum. Within the phyllum you'll find multiple classes. For example we belong to the class animalia, oh sorry. The kingdom animalia, the phyllum chordata. Our class is mammalia, alright? Within classes you'll have multiple orders then families then genus and a lot of times they kind of stop at species. That's the most specific. Notice that root word there? And that's the most specific group. Although some people will go into sub species and even other things like breeds. For example all dogs belong to the same species but a retreiver for example is very different from a Great Dane or an Irish setter.

Now remembering this sequence is one of the challenges that students often face. And when I was studying this in high school and college I too had to struggle to try to memorize the sequence. Then I had a grad student my zoology course who came up with a simple mnemonic memory device for remembering this. Now unfortunately, she gave me an r rated version of this and I'm going to clean this up. The sequence that you can use to remember this is King Phillip can order for good spaghetti.