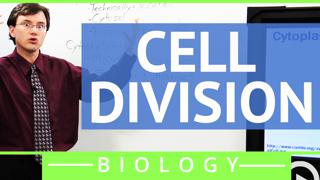 Chromosomes are organized coiled structures of DNA and histone proteins found in the nucleus of eukaryotic cells. After cell division, chromosomes uncoil into protein-packed complexes known as chromatins. The form of a chromatin is described as beans-on-a-string, in which DNA connects histone proteins together.

As a teacher the term chromosome is a really annoying one to teach because I know what it means. It's just a molecule of DNA and Scientists know what it means but when students first start to study they very easily get confused and the reason for that depends on some historical stuff. If you go back in time to when Scientists were firstly trying to figure out how do living things work? The biggest tool that they were using at that time was the microscope and when they looked through a microscope they saw these amazing things that they called cells.

Now if you've ever looked at a microscope at some real cells, a lot they look like clear bags filled with some clear stuff with some clear stuff in them and it's really hard to spot. So what they started doing, is they started adding little dyes and they found that one particular dye would stick to anything that had a nitrogen in it. And they found look in the center of this cell there's some colored stuff that has nitrogen in it. So they called colored stuff with nitrogen in it and that's chromatins. Chroma means color... is a word that's often slapped on, suffix that's often slapped on to words to mean it has nitrogen in it.

And so chromatin was the name they gave to the stuff that was inside the nucleus of those cells and that's we know now the DNA molecules spread out, why are they spread out at that time? Because they're being used, cells reaading genes sending out messenger RNA doing all the things that the cell needs to do. Now when I say spread out I don't mean it's completely unwound because you have 6 feet of DNA and every single one of your cells and in order to keep that DNA from being all broken and packaged up so it fits nicely it actually gets wrapped around these specialized proteins called hystons but just like if you've seen an old cassette tape you got the two spools with the tape wrapped very tightly around it, there is some part in the middle where it's unwound so that you can read it. So during the normal cell life the DNA is spread out, the chromosomes are spread out and looking through a microscope you would call it chromatin.

Now a visible chromosome is what you call the tightly packaged up DNA that you have shortly before and during cell division. Because at that time you're moving the DNA from one side of the cell to another, you don't need to use it you jut need to make sure it gets delivered properly without any damage or any loss or changes to the DNA during that process. Much like if I looked at your stuff in your bedroom right now I'm pretty sure it's in the chromatin spread out all over the place stuff. But if you're going to move from one house to the next you'll package it up. Still the same stuff all of your clothing et cetera but it's loosely organized versus tightly packaged up.

Now why did the Scientists at the time looking through microscopes call it something different? And that's because sometimes when they look through a microscope they would see just colored stuff filling that center part, other times they saw colored objects so they used their root words again and chroma again means color, some means body or object so they said hey there's colored objects in there it must be something different than that colored stuff we saw earlier so they called a completely different name even though it's the same stuff, it's still that same molecules of DNA. Now it turns out that you know that during cell division, right before cell division there's that s phase when you copy the DNA so instead of having one individual molecule or DNA you'll have two DNA molecules temporarily attached to each other so that they can be easily transported to the middle of the cell before anaphase when they're ripped apart. So for one brief period of time a chromosome a visible chromosome can be made out of two molecules of DNA if that's the case you call those two individual of molecules a chromatid and a chromatid. So this is a chromosome made out of two chromatids.

Just like this is a visible chromosome but it's only made out of one molecule, we don't bother calling it a chromatid at that point because chromatid means a sub part of the chromosome. Alright, now let's take a look at this YouTube video over here and it's going to show us how DNA actually get packaged up around hyston proteins to compact it make it easier to have it organized in the cell. So first we're going to begin looking at the DNA double helix now this is a really cool video and that it shows pretty accurately the actual structures. So here's our DNA molecule or double helix and it's bouncing around twitching a little bit because it's in the nucleoplasm floating around being hit by water molecules et cetera.

We need to wrap it around that spool so we bring in some proteins called hyston proteins and we package these together and we wind up with a double wrap around every spool of hyston proteins. We call these individuals spools with DNA wrapped around them, nucleosomes sometimes they'll have those arranged like beads on a string it's called. Then you start coiling up these nucleosomes together into tight super coils and then you take these coils and you make even greater coils and this is how you're able fit 6 feet of DNA and like I said into such a small space. Smaller than the smallest dot you can make on your paper with your pencil. And so even into chromatin stage which is loosely organized, it's like this but shortly before cell division you start to wrap these coils up and super coil them and arrange them on protein folding to form the chromosome.

Now if we pull back this is an actual picture through a microscope of a living cell and you can see the chromosomes being moved around during division. They get lined up in the middle and then they'll separate and you'll see the individual chromatids being pulled apart and here they go, and now that this chromatid is separate from that one over there each of them is considered an individual chromosome and that's the structure of a chromosome.