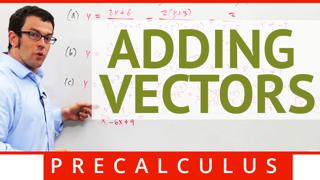 The Geometric Representation of Vectors - Problem 3

Let’s do another example. I want to plot the vector RP that starts at point R,(-2, 6) and ends at point P,(4, 9). I’ve got the points plotted here. Here’s R, here’s P. Let me draw a vector connecting them, starting at R ending at P.

What about this example; QS? A vector that starts at (-2, 1) and terminates at (4, 4). Let me draw that. Here are points Q and S. I’ll draw my vector, starting at Q and terminating at S. looks very similar to vector RP. Let me find this length.

So vector QS has length 3 root 5. Remember when two vectors have the same length and same direction, they are equal. That’s really the only identifying characteristics of vectors; length and direction. These two vectors are actually equal. RP equals QS. We’ll talk more about vectors being equal later on when we do operations on vectors.