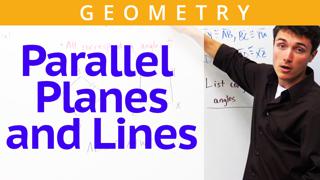 It's important to know about parallel lines because you're going to use it through all parts of Geometry. Technically parallel lines are two coplanar which means they share the same plane or they're in the same plane that never intersect. So if we had line l and line m, or I could say line xy and line wz, and if I told you they're parallel, first thing you're going to do is mark them. The way that you mark parallel lines is by using arrows. So some text books will use an arrow like that, other text books will draw on one more line and make arrows like that.
And you can identify parallel lines by having the same number of arrows. So if I had two arrows on this top line xy and only one arrow on wz I could not say that these are parallel. However if I drew in a second arrow here, then, from these markings I can determine that these two lines must be parallel. But how do I write that? Well, I will start by saying that my line xy so using arrows on both ends is parallel to so we use two big long marks wz. Okay? So in the drawing you mark parallel by using the arrows and when you're writing it out you're going to use these two lines that are next to each other and that look parallel.
Now, parallel lines are sometimes confused with skew lines. Skew lines are lines that are not coplanar and therefore can never intersect. So if we looked at this cube here, where we assume that we have six faces here and that their opposite faces are parallel, I can consider this face front face ab cd, and if I had some line in that face and I had some other line, so I guess I could draw an n, that line nef and if I had some other line here in this front plane, we have two lines, one in the plane of the face and one in the plane of the back face and these are never going to intersect but they're not parallel because they are not coplanar they're not in the same plane.
So on your true and false question when they say a parallel line, parallel lines are two lines that never intersect you're going to say false because you're going to say they could be skew. Parallel lines must be coplanar and they never intersect.