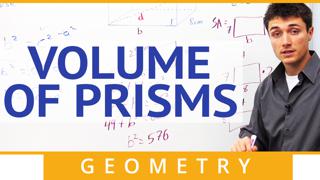 When talking and learning about 3-dimensional solids, there are a few important terms and solid properties that we need to know. One of the first things we need to know is how to label the parts of a prism such as vertices, edges, bases and lateral faces. It is also important to be able to distinguish between an oblique and a right prism.

When you're talking about three dimensional solids there's some key terminology that you need to know. The first is a vertex. A vertex is a point, not a line or a plane, but it's a point where three or more faces intersect.
When you have two faces that intersect you're going to create an edge. So an edge is going to be a line segment. Bases are going to be polygons. And in a prism these bases are going to be congruent and parallel. The lateral faces are the sides of the solid that are in between the bases.
If you drew a perpendicular segment, if you just picked a certain point on this prism on one base and your perpendicular segment to the other base, if that point intersects on the exact same spot on the corresponding base, then you have a right prism.
However, let's say you've shifted that prism a little bit. This is going to be called an oblique prism.
So if I picked this front top right corner and if I dropped an altitude from here, it should have fallen right on this front right lower corner. However it didn't. So the altitude that I dropped from here will be outside of that prism. So that's one way that you can determine if a prism is oblique.
If you're comparing the volume of an oblique prism and a right prism with the same bases and the same height, you're going to have the same volume. However the surface areas will be different. This right prism will have a lower surface area than this oblique prism.
So keep these terms in mind whenever you're talking about surface area or volume of three dimensional solids.