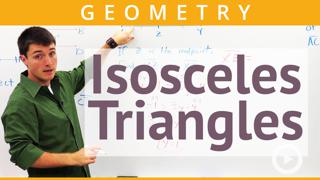 Recall that by the triangle angle sum theorem, the sum of the measures of the angles in a triangle is 180°. Using this fact, it is possible to find the value of a variable. When the angles of a triangle are given by expressions with variables, add these expressions together. By the triangle angle sum theorem, their sum should be equal to 180°. So, set their sum equal to 180°, and then, with algebra techniques, solve for the variable.

You can use algebraic techniques of solving and apply it to the triangle angle sum, which says that thee angles in a triangle must always sum to 180 degrees. That’s a theory that you’re going to be using the rest of geometry.

So if we look at this problem right here, we have three angles that all are in terms of a variable x. so I can write that these three angles once summed equal 180 degrees. So let’s write that equation starting with 2x minus 3 that quantity plus your next angle, 3x plus 8 plus your last angle which is 5x and I know that these one, two, three angles must add up to 180 degrees. So now it just becomes a simple algebraic equation. If I combine like terms, I can combine 2x, 3x and 5x and I get 10x. I can combine -3 and +8 and I get +5. And that’s going to equal 180 degrees.

Last step before diving is to subtract five, so we get 10x equals 175, and I’m going to divide by 10, and I see that x must be 17.5. So find x, x equals 17.5 where the key, just wanted to make sure that’s clear, the key to this problem was realizing that the sum of these three angles was 180 degrees.