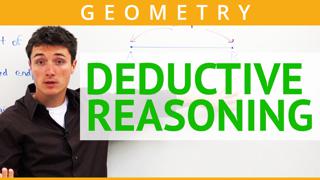 Inductive reasoning is the process of observing, recognizing patterns and making conjectures about the observed patterns. Inductive reasoning is used commonly outside of the Geometry classroom; for example, if you touch a hot pan and burn yourself, you realize that touching another hot pan would produce a similar (undesired) effect.

In Geometry we use two types of reasoning, Inductive reasoning and Deductive reasoning. The way that you'll see this tested is usually going to be number patterns or shape patterns or cases where it'll say somebody is trying to explain to the parents why they need a later curfew, are they using inductive or deductive reasoning.
So to figure this out lets start by defining Inductive reasoning, it is the process of recognizing or observing patterns and drawing a conclusion. So you're not justifying anything here you're not backing your thesis up, you're just saying here's a pattern and here's my conclusion. It doesn't even have to be correct inductive reasoning is just making a conclusion based on patterns that you see.
So one common way that teachers like to test you on this is with number sequences. So here we have a very common sequence called the Fibonacci Sequence and you're being asked to find the next two numbers. The key to this sequence is to say that 1+1 is 2 that 1+2 is 3 that 2+3 is 5, 3+5 will be your next number. So to find the next number to this sequence you need to add up the two previous terms. So the next number is going to be sum of 8 and 5 so that's going to be 13. So all you did there was use inductive reasoning you saw a pattern and you use it to conclude that the next two numbers are 8 and 13. Using this once more we have a pattern that goes 3, 12, 13, 52, 53, now what I'm going to do in my head is I'm going to say well how do I get from 3 to 12. I could say that is adding 9 or I could say that it is multiplying by 4, and after I multiply by 4 I see that I add 1. To get from 13 to 52 I could add a certain number or I can see that there might be a pattern for me here where I need to multiply by 4 and then to find my next turn I'm going to add 1. So to find my remaining numbers I need to multiply 53 by 4 so that's going to be 212 and then to find my remaining missing number I'm going to add 1, so this is going to be 213.
Now how does this apply to Geometry? Well we can use Inductive reasoning to identify definitions. So let's say here I told you these shapes were quadrilaterals and these shapes are not quadrilaterals come up with a definition. All you're going to use here is inductive reasoning, you're going to say "well this shape has four sides and nothing marked about being parallel or congruent." We've got our four sides here, we've got four more sides, we've got more sides, these two shapes do have congruence markings but since these two do not I can conclude that there's nothing special about quadrilateral and congruent sides.
If I look at non quadrilaterals I see that I have six sided figure, a three sided figure, a five sided figure a circle and a four sided figure that's left open. So what I'm going to conclude is that a quadrilateral is a closed polygon with four sides. So using inductive reasoning I came up with this definition, all I did was look at patterns and make a conclusion.
So the way you're going to differentiate this from deductive reasoning is that here we're not justifying our reasonings we're just observing and making a conclusion.