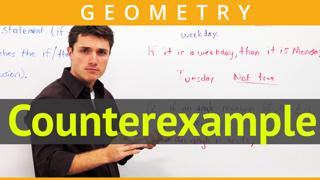 There are three undefined terms in geometry. From these terms we define everything else. The first term is point. The second term is plane. And the third undefined term is the line. So let's go back and define these as much as we can. Now we're not really defining point, we're just describing it. A point has no size; it only has a location. And the way that we label it is with a capital letter. So we can call this Point P. A plane is a flat surface that has no thickness, and it will extend infinitely in every direction.
So one way to visualize what a plane could be is to think about a sheet of paper. Or if there are two differences between a sheet of paper and a plane, the first is this paper does not extend in every direction. Secondly, this paper actually has some thickness and a plane will not.
Now you can name a plane using a single capital letter, usually written in cursive, or by three non-collinear points. And collinear we'll talk about in a second here, but collinear means they're not on the same line. So let's say you had a point right here: Point A, Point B, and Point C. You could call this plane, Plane ABC.
Definition of coplanar: We actually can define this, is points, lines, or anything, segments, polygons in the same plane. So two things are coplanar if they are, just like we have in the picture here, in the same plane. So "co", you can think of it as a word for sharing. So you can think of coplanar as sharing the same plane. Now the third undefined term is a line. And a line is set of points or, the word that you might learn later is locus, extending in either direction infinitely. So a line is going to be all the points, and we can actually select two of them to name it. So we can call this Line AB.
Now when you're labeling a line, it's key to include at least two points. Or if you have some sort of smaller letter over here, we can call this Line L. But notice how I'm writing the arrows above my letters; I have arrows on either side. And these arrows tell you, the geometry student, that it extends infinitely in this direction. Now this arrow here extends infinitely in that direction.
You can have points be collinear, that is, they share the same line. So here we could have, C, D, and E are all collinear. And if you look at Point F here, I drew this in to draw a contrast. You can see that Point F is not on this line, so F is not collinear with C, D, and E. But I could say that E is collinear with C and D, D is collinear with C and E, and C is collinear with D and E.
So the three key terms that are not definable, but only describable, are the line, which is a set of points extending infinitely in one or the other direction; plane, which is a flat surface with no thickness; and the third undefined term is point and that has a location and no size.