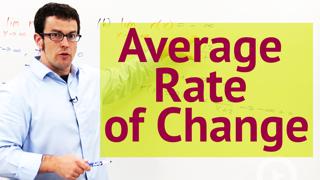 Let’s do one more average velocity problem. Here I have a graph representing the position of an object over time. Time is given in seconds and the position is given in meters. Although you’ll notice that on the position axis I’ve got no numbers indicated. So I’ll have to use just relative positions of these points to figure out what the position of the object actually is.

The way I’m going to answer that question is, I’m going to draw secant lines connecting each of these endpoints. Remember that the slope of the secant line between t equals 0 and t equals 10, gives you the average velocity between 0 and 10.

So I’ll draw that now. And the slope of this line looks like it’s 0. So I would say that the average velocity between 0 and 10 is 0. And average between 10 and 20, I’ll draw a secant line, between 20 and 30, and between 30 and 40. They're just at a glance. The slope of this segment and this segment, those slopes are both positive. This is the slope that’s negative. And that indicates that the average velocity between t equals 30 and t equals 40 is negative. So that’s my answer.