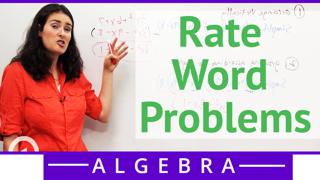 Mixture problems involve solving for an unknown given different quantities at different rates. In a problem that involves quantities at different prices, think about this relationship between variables: (amount x cost of ingredient 1) + (amount x cost of ingredient 2) = mix amount x mix price. Use the information in the word problem to fill in the known values. Simplify and use inverse operations to solve for the unknown value.

Here we have a word problem where we're combining peanuts and raisins to get some kind of mixture, but the difference between this problem and problems you might have seen before, is that now we have to figure out how much of one of our ingredients is going to go in to give us the desired cost.

Let's read the problem before we start. Mrs. Park sells a peanut and raisin mix for $6 a pound, how many pounds or raisins, which cost $7 a pound should be added to 1 pound of peanuts, which costs $4 a pound to make the mix cost $ 6 a pound? Oh my gosh there were so many numbers in there.

Let's try to get that stuff organized before we can write the equation. Keep in mind we are adding $6 dollar raisin which is pretty expensive okay sorry my fault the mix is $6 but the raisins are 7 they are more expensive than the mix and that makes sense because peanuts cheapen it out. Like by adding peanuts into my raisins I'm making the mixture less expensive.

The other thing I want to worry about in addition to my $3, three different prices which I'll deal with in a second, is how much my quantities are. I know I'm going to have 1 pound of peanuts that's going to be important and my mixture is going to be my peanut number plus my raisin number for amounts, so it's going to end up being a quantity like 1 plus x. Let's try filling in this equation.

Think about what you mix amount is, it's your raisins amount plus your peanuts amount, so I'm going to have R plus 1. This is tricky now because I have variables on both sides of the equal sign. That's just my amount of mixtures. One pound of peanuts plus I don't know how many raisins that's going to be multiplied by my mixture cost which is 6.

Now I have an equation with only one variable and I'm ready to go through and solve it. It's a little bit more challenging because I have variables on both sides of the equals sign. Let's simplify this so it looks a little more like what we are used to. 7R plus 4 is equal to I'm going to distribute the 6, 6 times 1 is 6 plus 6R. Oops! That's kind of hard to see, that's supposed to be an r 6r, oh not much better. You get the idea, 6R, good.

Now let's go through and solve that using my solving techniques. I want to get all my Rs on one side of the equals so I'll subtract 6r from both sides. R plus 4 equals 6, I'm almost there, R is going to be equal to 2. What that tells me is I need 2 pounds of raisins the question asked how many pounds or raisins I'm telling you R equals 2 pounds of raisins.

Make sure you label your answer with words or units so that it's relevant to the original problem. So again this guy was kind of tricky because I hadn't think about not only what's my variable going to represent, by reading the question like how many pounds of raisins that's where we let my variable represent amount of raisins, but I also had to think logically about what my mixture amount would be.

It was going to be my number of peanuts plus my amount of raisins, that's why this problem is a little bit challenging. But once I set up the equation when from here to here so I clean that up this is just a straight forward solving. Again the most difficult part and don't be too hard on yourself if you are not good at this stuff yet, it's going from the words to this step, this equation here.

You'll get better with practice but you are not going to get better if you skip theses problems guys you have to actually try them in order to improve, you can do it.