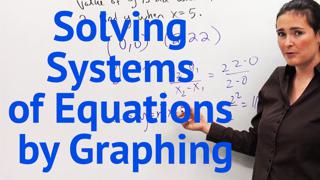 Introduction to Systems of Equations - Problem 2

Graphs of systems of equations can be used to model real world problems (i.e., word problems). It is important to keep in mind the units on the x and y axes so that you properly interpret the solution. Use the information given in the problem to write two equations. Keep in mind which is the independent variable (the x variable) and the dependent variable (the y variable). Remember that the solution of a system of equations is where the graph of the two lines intersect. In other words, it is where the two equations have the same x and y coordinates. Use the units on the axes to help you interpret what the solution of the system of equations means.

Graphs of systems of equations are really important because they help model real world problems. One thing you’re going to want to look for always, always, always in a graph of a system of equations is what the units are on both the x axis and the y axis. That’s going to help you interpret the solution which is where the lines cross.

Adam starts with 60 then he is increasing his money because he is saving 20 per week. That’s my system of equations. The nice thing about this problem is they already graphed it for us, we’ll look at that in a second. The problem says interpret the solution of the graph provided.

First thing, solution means the place where the two lines cross. We have to interpret what happens where the two lines cross, so let’s go check it out. In this graph, you can see Alex starts out at 200, but his line has a negative slope. He’s decreasing because he’s spending money. Adam starts at 60 and he is in creasing because he is saving money and we’re lucky they already told us the lines cross at the point (4,140). The question says what does that mean?

Another interesting thing it doesn’t necessarily relate to what we’re asked to do, but another interesting thing about graphs like this is you can see how Adam is going to continue to have his line increase, meaning he’s going to continue to get more and more and more money in his bank account. He’s always going to have more than Alex in this situation. Meanwhile poor old Alex is spending money going down and down and down. Some point out here, Alex is going to run out of money, but the important thing to think about for this particular problem is where the lines cross. That’s what meant by the solution to this system of equations.

So guys this is a pretty typical problem I bet you’re going to see something like this where somebody starts with this amount of money, somebody else starts with that amount. Keep in mind the positive and negative slopes to show if their money is increasing or decreasing. Also look at the point where the lines cross is the time when they both have the same amount of money.