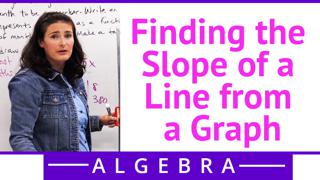 Finding the Slope of a Line from a Graph - Concept

One of the most important ideas you're
going to see in your whole study
of algebra is the idea of slope.
And slope just refers to
how steep a line is.
And that's kind of the basic definition.
That's something that I help -- or helps
me remember what slope means.


There's a whole lot of fancy notation
that goes along with it.
And we'll get into that in just a second.
But if you can just remember in the back
of your head that slope means how steep
the line is, it will
help you a lot.


So one thing you see is that anytime I
draw a straight line, the slope ratio
stays the same for
that entire line.
And here's what I mean.


Let's say those are my X and Y axes
and I have this line right here.
The line is equally steep
the entire time.
It has the same slope ratio.
And we're going to get in a second
what I mean by ratio.
And here's what I'm talking about.
When we talk about slope or steepness,
the way it's defined is by change of
Y over change of X. Like
in a fraction.
Change in Y on top of change in X.
That's why we call it a ratio.


Remember ratio is like a fraction.
So if I were to draw a little triangle
here that represents how steep my line
is, this would be my change in Y
piece because Y is up and down.
This would be my change in X piece,
because X is horizontal.
And whatever those numbers were on the
graph, I would write as a fraction.
That's one thing you want
to keep in mind.
Change in Y on top of change in X.


Sometimes we write it using this little
triangle.
This triangle is the Greek letter
delta, which is tricky.
Not only do you have to learn math
but now you have to learn Greek.
This means change in Y on top of change
in X. That delta just represents
the word change.


Then there's a formula I could use using
those X and Y numbers to find M, or
the slope.
And the way I would write that is Y to
take away Y1 on top of X2 take away X1.
This is the same thing just
written in a different way.
I'm finding out how much did my Y values
change and putting that on top of how
much did my X values change
in a fraction.


Anytime you're given a graph, there's
my axis and here's my line.
Think about if you were like skateboarding
and you were coming along, and you
hit this ramp.
This is an uphill ramp.
We call that a positive slope.
As opposed to if you hit this line here,
here you come along skateboarding,
I don't know why that's a skateboarding noise.
I just made that up. You're skateboarding.
You hit that thing, you're going down.
That's why we call it a negative slope.
Anytime a line increases from left
to right it's called a positive.
Decreases from left to right,
it's called a negative.


That's a whole lot to keep in mind when
you guys approach your problems.
This is all mathematical notation that
you're going to see over and over and
over again.
So you'll get used to it.


The one last thing I want to leave you
with is thinking about word problems,
because a lot of times graphs, as we
know, represent the real world.
Like this graph might be growth per day,
or how much something changes over
time.


So slope becomes really important when
you're looking at word problems.
It can be growth per day.
Like let's say my slope was 5. I would
change like five inches per day
or something like that.


It's really important when you're looking
at word problems that you keep in
mind the units that go with your X
and Y values so you can relate the
slope back to the real world.
You guys are going to do all
kinds of practice with this.


Again, slope is a really, really important
idea that's going to show up over
and over, but I think you'll be successful
if you can just remember that
slope means how steep
the line is.