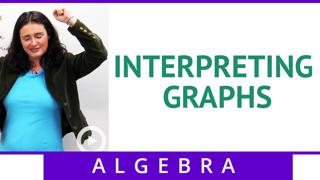 When you're graphing points in the (x,y) coordinate plane sometimes it can get kind of weird if you have a fraction and here's why. Like in this problem for example it tells us to go half a box in the x direction and then down one. That's kind of weird, keep in mind this is your x number, that's your y number. So starting from the origin which is (0,0) in the middle, I want to go half a box in the positive x direction and then down one. It's kind weird because it doesn't show up right in the corners which is what we're used to, it shows up half way in the middle. Don't worry though it's still a point on the graph, they don't have to always go through like the corner of the boxes.

So there we go. Tell us what quadrant it's in, it's going to be in quadrant IV because they're numbered I, II, III, IV. A lot of times in Math we don't like fractions, I can't blame you, personally I don't like fractions either, but it's okay I mean you still follow the same processes, you just have to think a little bit more cleverly to figure out how get that on the graph.